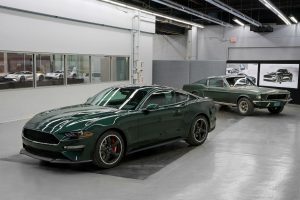 Don’t get us wrong, everyone here at Brandon Ford in Tampa, FL, thinks the 2018 Ford Mustang is one of the coolest cars around. But there’s something about the understated style of the all-new limited edition 50th anniversary 2019 Ford Mustang Bullitt that makes it stand apart from every other model out there. For starters, all additional and unnecessary flair has been left behind in favor of a more subtle approach. Like the 1968 Ford Mustang GT Fastback Steve McQueen drove in the movie “Bullitt” during the greatest car chase ever filmed – the car the 50th anniversary 2019 Ford Mustang Bullitt is honoring – the 2019 Mustang Bullitt doesn’t need it. Instead, it lets its coolness do the talking for it, thanks to its Dark Highland Green exterior color (as seen in the movie, though Shadow Black is also an option), its subtle chrome accents around the grille and front windows, its 19-inch aluminum wheels, its red Brembo brakes and its black front grille.

“This new Bullitt is, as Steve McQueen was, effortlessly cool. As a designer, it’s my favorite Mustang – devoid of stripes, spoilers and badges. It doesn’t need to scream about anything – it’s just cool.” – Darrell Behmer, Mustang Chief Designer

If you’d like to learn more about the new Ford Mustang lineup at Brandon Ford in Tampa, FL, or any of our other new Ford models, please get in touch with our friendly staff.

This entry was posted on Friday, February 23rd, 2018 at 8:00 am and is filed under Ford Mustang, Interior/Exterior Style. You can follow any responses to this entry through the RSS 2.0 feed. Both comments and pings are currently closed.